In 1990 somebody gave my brother the smallest kitten I'd ever seen. She must certainly have been the runt of the litter. My brother said she was tiny, like a hobbit. It was the perfect name for her. He couldn't keep her, so after several days of the wee fuzzy giving our family dog what-for, and my swearing I did not want a cat, no matter how much it liked to play with my necklaces and no matter how darned cute she was, I took her home with me. She would be my sole companion for many years. 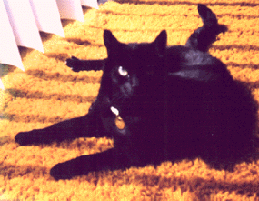 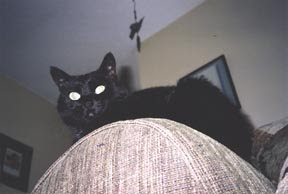 Then it was over. I didn't think my heart could break any more than it already had. My first fuzzy baby. My friend for nearly half of my life. I know that 20 years is a good long life for a cat. I was lucky to have had her in my life. I miss her terribly. And now, a few days after her passing, my family seems 'broken' somehow. My dear 5 lb tangle of terror, my sweet Halloween cat, I miss you. RIP Hobbit. It's not the same, sitting on the couch without you behind me.
Posted by Yasher at 12:51 PM 2 comments:
Labels: Hobbit, Pets 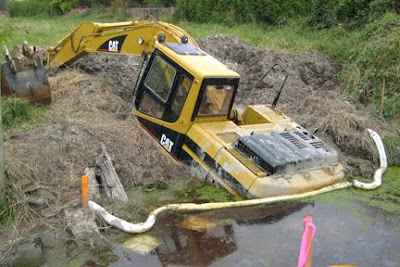 This thing has been in this ditch for several weeks now. I'm sure there is a brilliant reason why they'd just leave it there to continue sinking, but darned if I can imagine what that reason might be.
Posted by Yasher at 8:36 PM 1 comment:
Labels: bad parking, in a ditch

This past weekend, my mom and sister were giving sea shells to the girls. My daughter was impressed with one shell and remarked that it looked painted. My father said it must have been painted by God. My daughter replied, “Grandpa, there are no such things as gods!”

One of Weeb’s favorite movies is Disney’s Hercules. As I’m a bit of a Mythology buff, I’ve explained to her that the story of Hercules was a story that people used to tell but is not a story about real people. I’ve also explained how Disney’s version is quite a bit different from the Greek and Roman tales (for example, Hera is NOT Hercules’ mother, Hades was not a bad guy and Pegasus was more Perseus’ buddy than Hercules’ made-from-clouds pal, and there were 3 or 9 muses, depending what you read, not 5). My daughter understands that the gods in the story are not real and that people, long ago, told stories to teach lessons and to entertain themselves.

I guess it’s time I talked a bit more about God with her. I’ve talked with her a bit about it before. I’ve told her, as simply and logically as I can, what I believe and I’ve explained that not everybody believes the same thing or worships the same way. We’ve got a way to go.

I will say this, I don’t have the heart to tell Weeb the truth about what happens to Hercules and Megara in the non-Disney stories. I think that one can wait.
Posted by Yasher at 9:56 PM No comments:
Labels: mythology, religion, weeb

I didn’t leave the house wearing make up this morning.

I usually don’t. I’m happily married and work with two fellows, who though very nice, I’m not trying to impress with my looks. In fact, having worked with plenty of men in the past, I have found looking good just gets me into trouble.

Why not look good for my husband, you ask? Well one, he is peculiar and thinks I look good, no matter how crappy I look to the rest of the world. And two, I’m not going to see him all day.

So I was sitting at my desk, doing the typical paper shuffling that comes with my job when something happened that lead me to sneak off to the bathroom to apply a bit of make up.

Now what, you must be wondering, could persuade an otherwise make-up-lazy woman to un-ugly a bit? Well I’ll tell you.

My boss came in with his wife.

It is my belief that women fuss over how they look because of other woman more than wanting to be attractive to men. We just can’t stand the idea that we might be ugly compared to the women around us. It’s not a competition as much as we just don’t want to ever be described as ‘the ugly one’.

It’s amazing the power that an eyeliner pencil and a tube of mascara can have on a gal. It’s even more amazing how we really think it makes any difference. I can promise you that the only one who knew I was wearing any make up at all was me. I even left it on until after my husband got home from work. I can also promise you that he didn’t notice.

I won’t leave the house wearing make up tomorrow morning.

I’m pretty sure it’s not going to matter much.
Posted by Yasher at 9:37 PM No comments:
Labels: people are weird
Newer Posts Older Posts Home
Subscribe to: Posts (Atom)

Yasher
"Hey Yash, you wanna start a blog about nothing?" Ya, sher.

Weeb is a Master Ostrich Rider. Some call her the Ostrich Whisperer. Some just call her Weeb.

Show me posts about...

Check out these blogs...