As a change from the origami tulips, I thought I'd post some pictures from one of my folks' gardens, including a real tulip.
I love multicolored tulips. 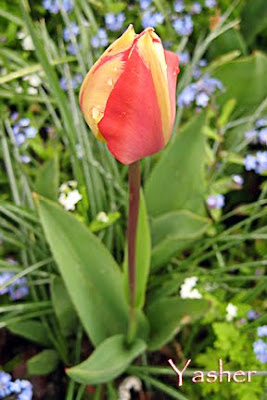 I have no idea what these are. They're pretty though. They remind me a bit of Stephanotis, but I know that they aren't. 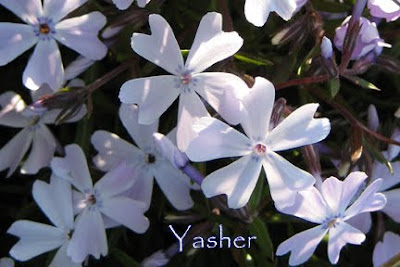 These are similar to the ones above, though the petals are skinnier and they're obviously not the same color. They mix together in part of the garden and look so pretty together. 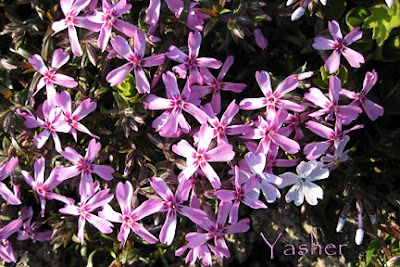 I love my folks' place. They put so much work into the gardens, especially my dad. It's like heaven there. I wish I had inherited their green thumbs (rather than an allergy to the entire outdoors - though that did get me out of a lot of weekend weeding chores and mowing the lawns).
Okay, my flower warriors, what are the flowers, above?
Posted by Yasher at 9:41 PM 1 comment:
Labels: flowers, my folks, photos of stuff 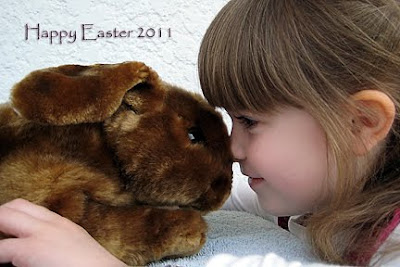 Posted by Yasher at 10:30 AM No comments:
Labels: seasons greetings, weeb

For the past few weeks, I've been folding Origami Tulips for BLOSSOM AT RICHMOND CENTRE.
This was our last weekend to donate the folded florals. We brought 130 to the mall on Good Friday, and yesterday we brought another 50. How I managed to fold another 50, overnight, is a bit of a mystery to me. It would seem I get some origami Zen.
From what I understand, staff were staying last night to take down the display and count the wishes / origami tulips. For each wish (which one would write on the origami paper prior to folding), Richmond Centre will donate $1 to the Children's Wish Foundation (up to $10K). 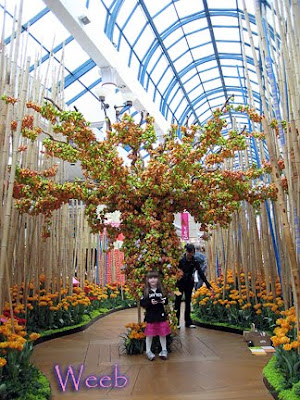 The tree was FULL of origami tulips. Every time we tried to hang any, some would fall off and we would spend just as much time re-hanging those that had fallen. You can't really tell from this picture, but the tree was very dense with folded tulips. The mall had added wires that looked like branches to accommodate the obvious constant flow of folded donations. 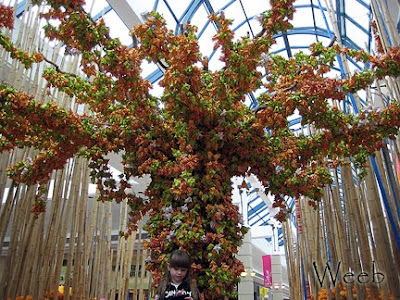 The pictures just don't do justice to show how many origami tulips were there! 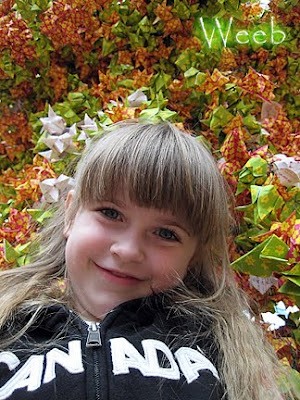 This is Weeb, standing at the base of the tree. It gives you some idea of how many tulips were overflowing from the tree. 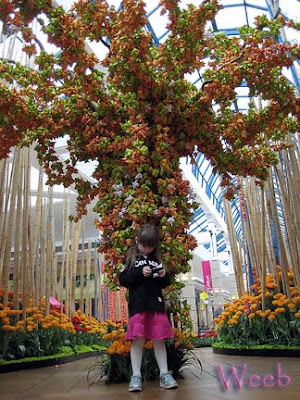 Thanks for your patience, Weeb. We don't need to bring any more bags of origami to the mall, and I don't need to take a million pictures of you and the tulips / tree. Not for a year or so, anyways. And thanks to the staff at the Customer Service Desk, who smiled every time we showed up with our bags of origami!
March 19, 2011 - We went to the mall and each did a page; 3 origami tulips.
April 01, 2011 - April Fool's Day we donated another 33 origami tulips.
April 10, 2011 - We went to the mall and donated another 34.
April 16, 2011 - We took a big bag to the mall and donated 130 origami tulips.
April 22, 2011 - Another 101 donated. Plus an origami crane.
April 23, 2011 - I folded 50 over night and donated our last batch for 2011. This brought our total to 351 folded origami tulips!
I hope Richmond Centre reached their 10,000 Origami Tulip goal. I'm hoping they post the final count on their Facebook page, soon.
Posted by Yasher at 9:51 AM 1 comment:
Labels: awesome, donating, flowers, origami cranes, photos of stuff, seasons greetings 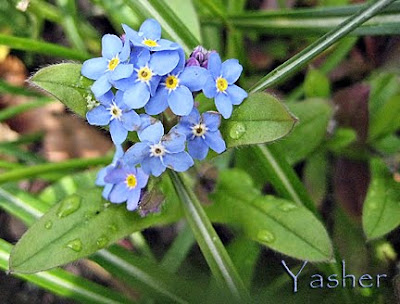 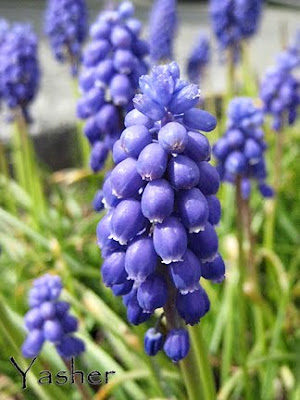 I've no idea what these (below) are. It's a tree that is fairly common in metro Vancouver. It tends to bloom the same time as the cherry trees, but the petals are much larger and a completely different shape. They add to to the lovely pink around here though. You can't poo poo the pink! 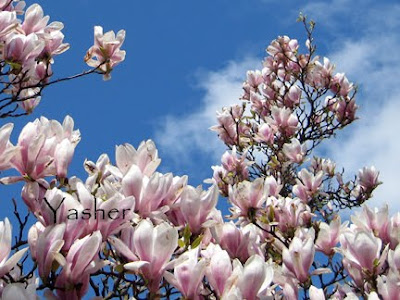 I haven't been feeling well this week, so I had lots of time to fold Origami Tulips. Seemed the perfect thing to do while I was out of commission. The result was a donation of 130 Origami Tulips to Richmond Centre Mall's Wishing Tree. 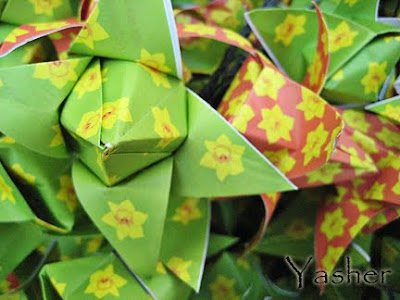 This temporary display is up until the day before Easter. The origami sheets are free at Customer Service. For everyone one you put up on the tree, Richmond Centre will donate a dollar to The Children's Wish Foundation.
My thanks to the lovely lady at the Customer Service counter who has been helping us put stems onto our folded flowers, and tying them into bundles for us to hang up.
This is what 130 Origami Tulips look like. 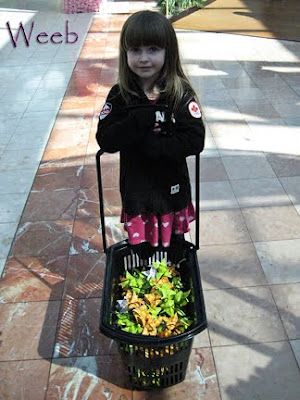 This is what Wonko looks like as he hangs up said 130 Origami Tulips. He was kind enough to hang a bundle up for a nice 'short' family, who were very thankful. 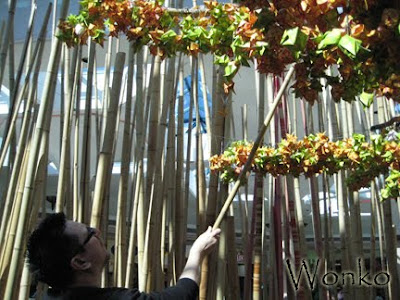 So our last drop off will be next Saturday. Not sure how many I'll have done by then, but it'll be nowhere near 130, I'm certain. I'm not that bothered; I'd say we've done our fair share.
I'll try to get a decent shot of the tree next week.
Posted by Yasher at 2:08 PM 1 comment:
Labels: donating, origami cranes, seasons greetings, weeb, wonko

We've been bringing more Origami Tulips to the mall to add to the Wishing Tree. We've been doing this since the middle of March. We did 3 that first day, then added another 33. Today we added another 34.
See: Blossom at Richmond Centre and Blossoms Galore posts. 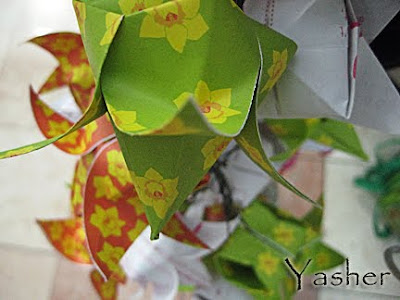 The lady at the counter has been very cool about helping us put stems on the tulips and winding them together, then we go hang them on the tree. I wonder how many we'll have donated before they take down the display and count all the paper flowers. They (Customer Service) tells me that they really are going to count them all! 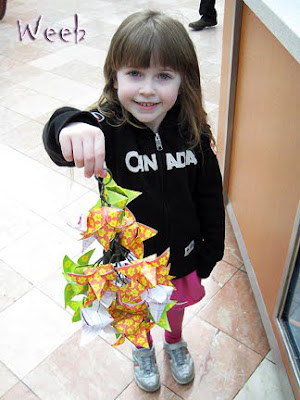 There is still lots of time to do some folding and donate to this wonderful charity. The origami sheets are FREE at Customer Service in Richmond Centre Mall. I'm told we can keep donating until the Saturday before Easter.
Posted by Yasher at 1:25 PM 1 comment:
Labels: donating, origami cranes, seasons greetings, weeb, wishes

BIKES AND BODIES AND BOOTS (TO THE HEAD)

We went out briefly tonight. But that's not really interesting.
The interesting bit happened on the drive home.
We were turning right, off a main street, to a side street when we noticed a body and a bike lying in the crosswalk of the main street.
We stopped the car. Wonko hopped out. I turned the car off and called 911, because, you know, body and a bike in the street!
I thought, momentarily, that it was odd that they were lying so straight, on their back, in the crosswalk. And why was the bike at his head? And why couldn't I see a face? Then I thought back to an event in my teen days where a friend of a friend had been drunk and passed out on a road and been hit by a car (he didn't die, but it didn't have an especially happy ending).
Two women were on the sidewalk, watching. I got out of the car to see better. Poor Weeb kept asking what was going on and I told her that we thought someone needed our help and I was calling 911.
As the 911 operator answered (very quickly, I might add; I've always been impressed with our 911 service), Wonko was walking back to me, then he turned and went back to the body and dragged what was now very clearly NOT a body, to the sidewalk.
I apologized to the 911 operator and explained that we thought someone was in the crosswalk, but it turned out to be a bike, and clothes stuffed with paper to look like a body. And it was covered in ketchup.
Yeah, you read that right.
The 911 operator explained he still had to transfer me to the police. Now I'm explaining to a police officer what had happened. He seemed confused as to why I was transfered from 911 if it was a prank. I explained the 911 operator said they had to transfer me. Then I suggested that they might want to send a car since Wonko had just dragged the stuff to the sidewalk and the A-Hole pranksters might just drag it back to the street.
When I say this was in the crosswalk, I'm saying if a car had been driving in that lane, it would have run over 'the body'. Or at least screeched to a halt trying to avoid it. And how would you feel on a nice Saturday night if you'd hit something with your car? I know I'd want to hurl.
I will say that another fellow was driving from the side street onto the main street when he saw our car stopped, doors open and Wonko pulling something off the road, and this guy got out of his car and offered to help. Hats off to you, dude!
And a big thumbs up to my brave little Weeb who kept her cool in the car!
So to the kind pranksters who covered my husband in ketchup, gave me a heart attack and freaked out my kid, BOOT TO THE HEAD.

Posted by Yasher at 9:49 PM 5 comments:
Labels: boot to the head, people are weird, ranting, right vs wrong, weeb, wonko

LILY OF THE VALLEY BUSH

These flowers are from a bush outside our front door. I think it's a Lily of the Valley bush, but I'm not certain (as I'm more than a little bit botanically challenged). They're pretty flowers. They always make me think of faeries. 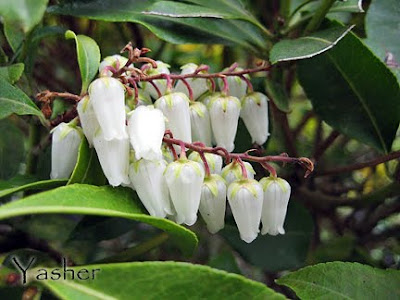 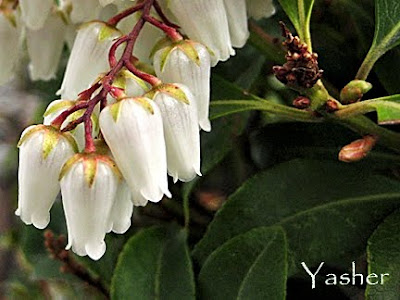 Added 19Apr/11: I have learned that this is called a Pieris. I have learned this because our idiot strata have decided that we need yet another one and a 6" (yes, inch) cedar in front of our house. I don't WANT either of them. Our front beds are fine, thank you very much. But please, go ahead and spend $800 of council money on trees that are unnecessary and unwanted.
Posted by Yasher at 12:01 AM 3 comments:
Labels: flowers, photos of stuff

A couple of weeks ago, I posted about Blossom at Richmond Centre. For every origami tulip that is made, Richmond Centre will donate a dollar to the Children's Wish Foundation. I like origami. We took our second batch (yes, batch) of origami tulips to the mall today. Add another $33 to the donation! 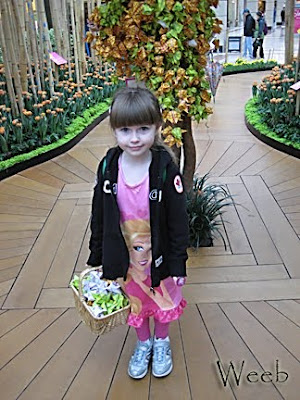 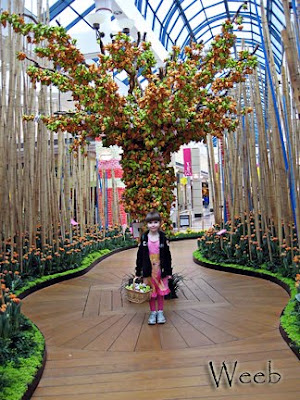 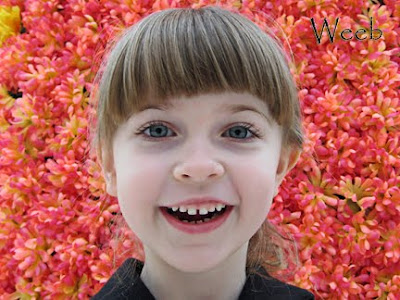 Okay, the flowers behind Weeb in this picture are fake, but with a face this cute, who can tell?
Posted by Yasher at 8:44 PM 1 comment:
Labels: donating, photos of stuff, weeb
Newer Posts Older Posts Home
Subscribe to: Posts (Atom)

Yasher
"Hey Yash, you wanna start a blog about nothing?" Ya, sher.

Weeb is a Master Ostrich Rider. Some call her the Ostrich Whisperer. Some just call her Weeb.

Show me posts about...

Check out these blogs...